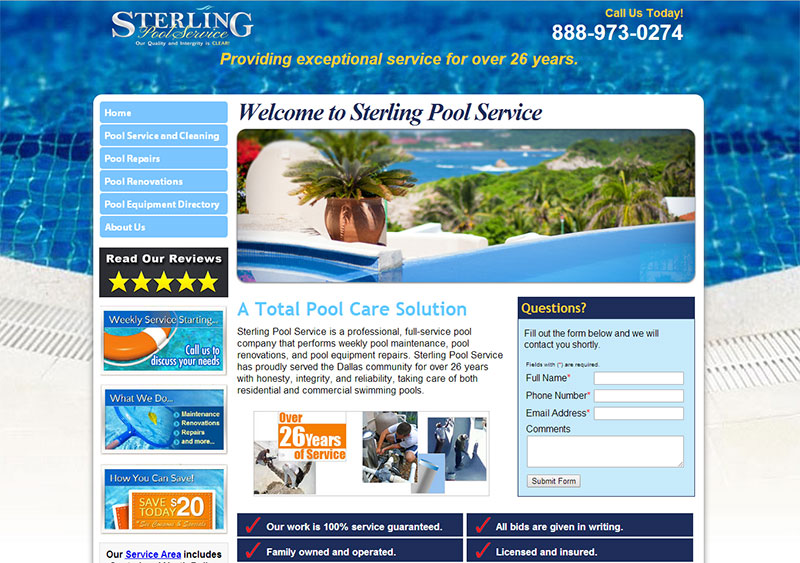 "This is for anyone who has hired a website design or optimization company, only to spend thousands of dollars with no results. If this is you – you must read my story.

Our journey started four years ago, hiring a local company that was recommended by a friend. They built what we thought was a good website and hired them to optimize and manage it monthly. They were six months over the original delivery date, which affected our busy swimming pool season. There was no apology; just excuses. Over the next two years we would experience a meager 20 calls a year, and being treated as though we were Neanderthals. Having reached our limit of rude and condescending conversations and emails, we sought out another company recommended by a business acquaintance.

This time the website was not only not delivered on time, but the people fell off the face of the earth – and with them, took our money. So we Googled the top ten website design companies and after much research and talking with references, we hired one of these companies. But once again, the website was not delivered on time and again affected our busy season. When we complained, they offered compensations and we conceded, hoping they would come through for us. They finally completed the website and then against our better judgment, we hired them to optimize and manage our website. And history would repeat itself. We spend six thousand dollars and received no phone calls, and were on the fifth and sixth page of Google after six months. When we asked them about this, they would throw out all types of excuses and technical terms which for us, was another language. Once again, we started looking for another company.

Through a series of events that can only be credited to God, our name was given to Michael Waldum with Central Station Marketing. When he first called, I was so skeptical and burned that I almost wrote him off. But after we met with him, we realized he wasn't a salesman – he was a person that genuinely cared and wanted to help us. And boy, did he help us.

CSM did exactly what they promised: they delivered our website to the day in the contract. Once it launched, we received phone calls immediately and our revenue has greatly increased over just two months. This is because 1) They did a fabulous new website, which they did based on their knowledge of human behavior, and 2) It was on the first page of Google. The entire staff at CSM are knowledgeable and experts at what they do. At the same time they are kind and explain things to you so that you can understand. You know that if you call them, you are never a bother and they always respond to emails in a timely manner. There is none better. They have no gimmicks and they do what they say.

On a personal note – when my mother passed April 18, I received heart-felt condolences in an email and then a very personal sympathy card, signed by the entire staff. It was a card that was selected with great thought and compassion. We feel like they’re family and in way, they are. We love them because they’re simply the best in the industry, and we are treated with great respect and thoughtfulness.

If you, like us, have spent thousands of dollars, endless weeks with no calls, and have been taken advantage of, you need to hire CSM to build and manage your website. Don’t hesitate – call them and start making money. Most of all, you can trust them.